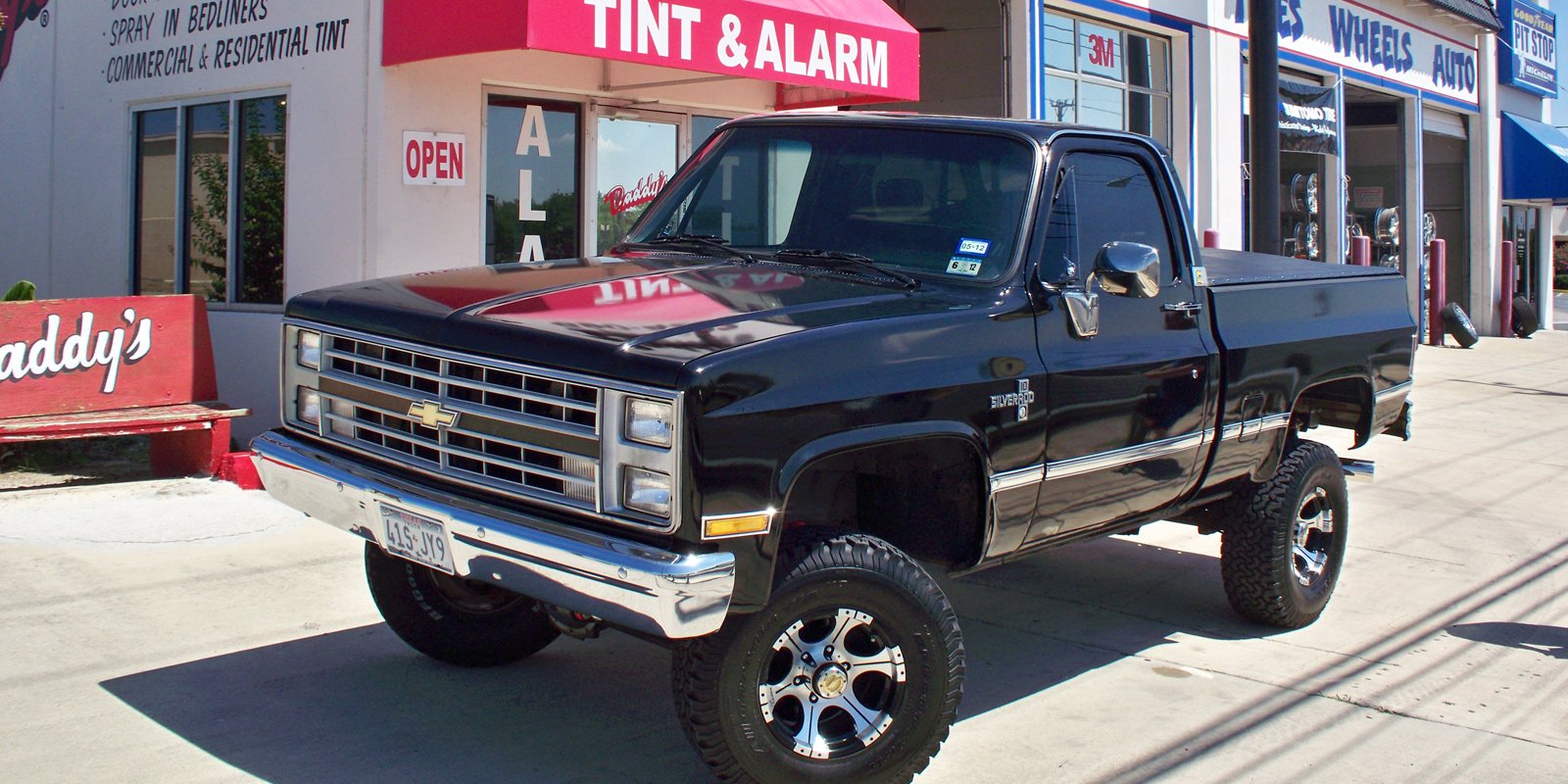 Window tint is a cost-effective way to enhance the appearance of your vehicle, provide UV protection, create privacy and reduce heat and glare. Tint also makes your window more resilient to break-ins and reduces glass shatter in the event of an accident.

Daddy’s only uses 3M Color-Stable and 3M Ceramic IR window films. After using different brands and different grades of window film throughout the years, we have found none compare to these films performance, quality and value.  If you put on a poor quality “cheap” window film to save money, you will likely end up spending two to three times as much when you have to have it redone after the “cheap” film turns purple, bubbles and or fades to clear.  A billionaire once said “I am not rich enough to buy cheap products”

Not All Window Tint Is the Same!

Several brands of window films are available to consumers: 3M, SunGuard, Sun-Tek, Madico, Wincos, Formula One, Johnson, XPEL and Lumar to name a few.  In addition to the numerous brands of window film, each brand also offers many grades of film: Color-dyed, Metalized, Carbon and Ceramic.  Based on our research and experience using window films since 1988, 3M Color Stable and Ceramic IR are absolutely the way to go!

The following is an explanation of the different grades of the 3M films. 3M’s pricing is based on the performance, technology and warranties of their different films. With 3M you do get what you pay for. Don’t be fooled just by hearing the 3M name, the different qualities really do make a difference.

Daddy’s does NOT offer the 3M FX-ST, FX-HP or FX Premium and here is why….

3M FX-ST film is 3M’s entry level color-dyed film. It is 3M’s lowest quality film that ONLY comes with a three-year warranty which does NOT guarantee against fading or turning purple. FX-ST film is typically priced at $149 for a passenger car. Daddy’s does not carry this film based on it’s tendency to fade to purple rapidly.

3M FX-HP film is a metalized and color-dyed film… however, the metal in the film interferes with wireless signals. This means the range of the remote controls to your vehicle, cell phone or GPS systems, or even AM Radio stations may not perform well. FX-HP film is typically priced around $189 for a passenger car. The FX-HP film comes with a lifetime warranty, however, it is NOT guaranteed against turning purple. Daddy’s does not carry this film because of it’s lack of warranty coverage and signal interference.

Daddy’s DOES offer 3M Color Stable and 3M ceramic IR films and this is why….

3M Color Stable window film is constructed with a patented Nano-Carbon technology. This means the film derives it’s color from carbon material which never fades and protects against Infrared Rays which heat up your car. 3M Color Stable is a true black film that does not have the “mirror look” that the metalized films have. It is also much easier to see out of than the lower grade 3M films. 3M Color Stable’s best heat rejection is 57% and comes with a Nationwide Lifetime Warranty that guarantees the film will NEVER fade or turn purple. This film is typically priced at $299 for a passenger car.

3M Ceramic IR film is our TOP OF THE LINE window film with the BEST HEAT REJECTION!! This film is on par with competitor’s top films which are priced much higher…(XPEL XR-Plus priced at $699 for most 4 door vehicles VS Ceramic IR for $429 with specifications almost identical!)  3M ceramic IR is a nano-ceramic film that will not interfere with mobile phone or GPS signals, it rejects up to 66% of total solar energy and provides 95% infrared rejection.  This film will reduce the heat on your skin for optimal thermal comfort.  The Ceramic IR film also rejects 99.9% of UV light which earns it the Skin Foundation’s Seal of Recommendation.  Prices for this film on a 4 door vehicle start at $429 and is backed by a 3M nationwide warranty which is guarantees the film will not fade, will not lose performance and will not turn purple.  Its the best warranty available.

3M has developed this window film using a multilayer nanotechnology which works with materials smaller than the width of a hair.  This advanced technology allows 3M Ceramic IR Window Film the ability to reflect up to 95% of the sun’s heat producing infrared rays and 51% of total solar energy with high visible light transmission resulting in a crystal-clear film that will not interfere with mobile phone or GPS reception. The 3M Ceramic IR Window Film has a UV blockage performance of 99.9% and a total SPF that exceeds 1700! Not only will your interior will be protected, but more importantly, you and your passengers will be guarded against sunburn, premature aging and risks associated with skin cancer.  This film is recommended by the Skin Cancer Foundation.  Pricing for most windshield starts at $269… again when compared to XPEL XR-Plus which is priced at $525 for the windshield 3M ceramic IR simply can’t be beat.